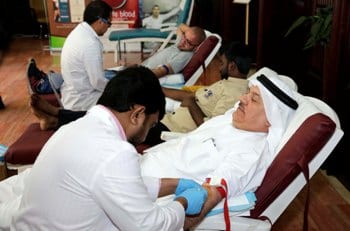 Dubai Municipality held its annual blood donation drive on Thursday in cooperation with the Blood Donation Centre of Latifa Hospital of Dubai Health Authority. The campaign held at the City Hall of the Municipality from 9am to 12pm received tremendous response from the employees of the civic body.

Khalid Badri, Director of Corporate Marketing & Relations Department said the campaign aims at supporting the national efforts to encourage voluntary blood donors. “It also carries an awareness objective of educating people on a larger scale of the need to donate blood regularly due to its short shelf life,” he added.

He also stressed that the campaign draws great attention to the health of blood donors and the quality of their care. “It is a critical factor to achieve the commitment and willingness of blood donors, thus contributing to the dissemination of a health awareness culture among the community and the Municipality employees. The campaign also contributes significantly to the promotion of the concept of social unity and integration as well as the spirit of social responsibility and human values,” said Badri.

Doctors confirm the multiple health benefits that accrue to the donors from blood donation initiatives. It stimulates the heart muscle and blood circulation, which helps reduce the risk of heart disease and stroke among the donors, in addition to reducing blood pressure and cholesterol and many other health benefits as that one blood bag can save three people in urgent need of blood.

It is worth mentioning that Dubai Municipality pays great attention to holding this campaign annually, which was first launched in 1996 and enjoys the participation of a large number of employees.