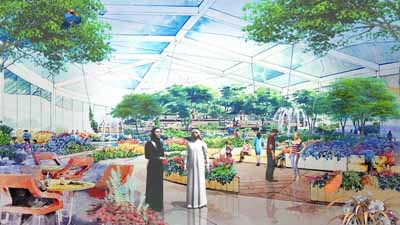 Deputy Ruler of Dubai, UAE Minister of Finance and Chairman of Dubai Municipality His Highness Sheikh Hamdan Bin Rashid Al Maktoum has approved the cave and glass house project in the Qur’an Park at an estimated cost of Dhs10 million.

This was stated by Eng. Hussain Nasser Lootah, Director General of Dubai Municipality, who said that the approval of His Highness for this project comes in order to keep up with the basic needs of the population of the city of Dubai for the Municipality services.

“The Qur’an Park is considered to be one of the most important creative initiatives of Dubai Municipality in the establishment of parks and increasing the green areas in the emirate of Dubai. Setting up of this park is a great achievement for the city of Dubai in the field of landscaping and will be one of the most prominent, unique and distinctive landmark hosted by Dubai emirate. It will also be a great attraction for tourists and residents of the emirate,” he said.

“The park is considered a great opportunity to explain the meanings of a lot of wonders and miracles mentioned in the Holy Quran in the scientific and medical fields, and the benefits of the plants mentioned in the Holy Quran and how modern medicine is highly dependent upon these plants for treatments as well as their environmental benefits,” said Lootah, adding that the Qur’an Park will be one of the technical highlights of Dubai, and complementary to the recreational, educational and tourism projects implemented by the Municipality in the emirate.

He said the Qur’an Park aims to extend the bridges of intellectual and cultural communication with different cultures, religions and people in order to introduce them the accomplishments of the civilization of Islamic religion in the field of plant environment and to prepare a scientific data of the plants of the Arab environment in order to increase performance efficiency in agricultural production and scientific research.

Lootah said the vision of the project is to have a Qur’an Park in the heart of a modern environment with an Islamic vision and urban values. “The project has a strategic location in Khawaneej at a total area of 60 hectares. Among the most important elements of the project is the Glass House, which contains plants mentioned in the Holy Qur’an and the Sunnah of Prophet Mohammad, as well as shops selling herbs and plants mentioned in the Holy Quran. The Cave of Miracles contains the miracles mentioned in the Quran, illustrated using the latest interactive technology,” explained Lootah.

The project consists of 12 gardens, containing plants mentioned in the Holy Qur’an and the Sunnah explaining their scientific and medical benefits and uses, in addition to solar trees with a unique design inspired by the Arab and Islamic calligraphy, specially designed for the Qur’an Park project. The solar trees contain solar panels and Wi-Fi system with facility for charging mobile phones and shaded seats for visitors.