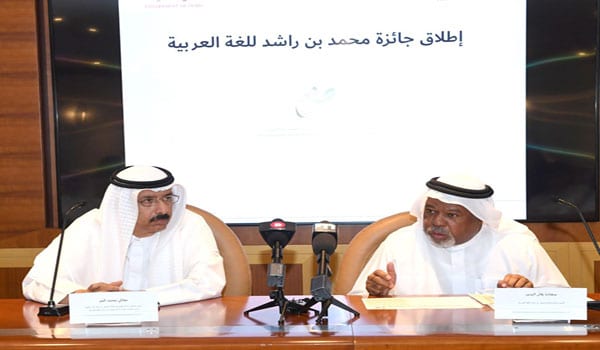 The Board of Trustees of the Mohammed Bin Rashid Arabic Language Award on Wednesday announced the launch of the 5th cycle of the international Arabic language award, which attracted more than 1,300 nominations from 80 countries around the world, including non-Arabic speaking countries during the last cycle. The award encourages exceptional contributions in serving the Arabic language, honors its pioneers, and highlights successful and distinctive experiences in its dissemination and teaching.
The announcement came during the press conference held on the sidelines of the first meeting of the Board of Trustees to discuss the work plans for the 5th cycle of the award and the formation of technical committees, in addition to coordinating the agenda of the award and the time schedule for receiving submissions, as well as the final evaluation and announcement of results.
The meeting, chaired by H E Mohammed Ahmed Al Murr, Chairman of the Mohammed Bin Rashid Al Maktoum Library Foundation and Chairman of the Board of Trustees of the Mohammed Bin Rashid Arabic Language Award, was attended by H E Bilal Al Budoor, Secretary General of the Award and former UAE Ambassador to Jordan, Dr. Ali Bin Musa, General Coordinator of the International Council for Arabic Language, Dr. Obaid Al Muhairi, Executive Dean of Arabic and Emirati Studies at the Higher Colleges of Technology, Professor Dr. Abdelkader Fassi Al Fihri, President of the Association of Linguistics, Morocco and Dr. Hanada Taha, Professor of Arabic Language at Zayed University.
A number of initiatives and campaigns will be developed in the coming period to promote awareness of the Award and its branches, which aim at honoring outstanding initiatives and exceptional contributions to support the Arabic language in the fields of education, media, Arabization, technology and the preservation and dissemination of Arabic linguistic heritage.
The award includes 10 categories that are honored annually. The first category will be allocated to the best project in the field of Arabization and translation work in Arabic. In the field of information, the Award will honor the best works in traditional media, such as television, press or radio news programs. In interactive media, the best creative design carried out on social networking sites will be honored. In the field of technology and smart apps, the award will recognize the best smart app for teaching Arabic through computer programs or smart phones and the best website for promoting Arabic.
Under the Arabic Linguistic Heritage Branch, a category was dedicated to honoring the best initiatives that contribute to the preservation of Arab linguistic heritage through its collection, dissemination and making it accessible and easy to scholars and specialists through Arabic manuscripts, libraries and publishing houses.

Education received a large share of the award categories to include higher education and public school education, as it honors the best initiatives, projects and programs designed and implemented by institutions of higher education to encourage the use of Arabic in colleges or universities. In addition, it will honor the best initiatives that help to teach the Arabic language in terms of curricula or teaching methods, apart from celebrating centers and programs specialized in teaching Arabic to non-native speakers, as well as assigning a category of initiatives that encourage reading in Arabic and raise awareness of its importance and facilitate access of books to readers.