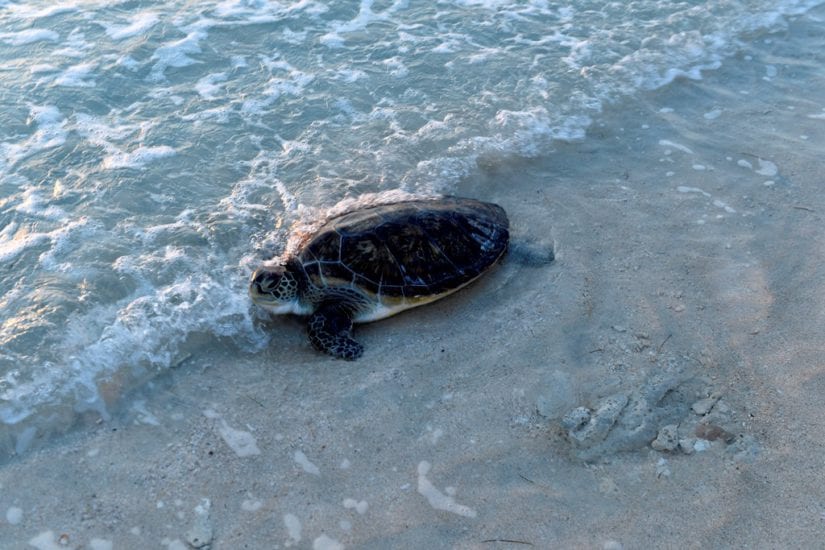 In cooperation with Burj Al Arab Turtle Rehabilitation Center and the Emirates Marine Environmental Group (EMEG), Dubai Municipality has organized an event to release 7 Green turtles and 11 Hawkbeak turtles, in the presence of Dawoud Al Hajri, Director General of Dubai Municipality and Ali Saqr Al Suwaidi, President of EMEG and the concerned officials in the Municipality. A total of 52 small turtles have been released that were recently hatched from their nests in Jebel Ali Wildlife Sanctuary.

According to the classification of the International Union for Conservation of Nature (IUCN). There are two types of turtles in the reserve threatened with extinction and categorized in the Red List. The first species is Chelonas mydas, which depends on the diversity of natural habitats for food, and the second type is Eretmochelys imbricate. Jebel Ali Reserve is the only beach area in the Arabian Gulf where these turtles lay their eggs, while all other nesting areas are on the islands.

Dubai Municipality arranged monitoring programs during the nesting season, as sea turtles are an indicator to a healthy ecosystem. Therefore, Dubai Municipality developed a special program for satellite tracking, targeting raising a high level of knowledge of migration paths, patterns of movement throughout the year and their nutrition areas, contributing to the development of strategies to protect this species through cooperation with other parties at regional and local levels. In addition, developing legislation aimed at improving survival opportunities, including proposing new areas to preserve their feeding and reproduction.

The Eretmochelys imbricate turtles’ nesting season extends from March to June, during which its eggs are kept in sheds to protect them from predators such as Arabian foxes and seagulls. The average female adult lays eggs three times per season, over a period of two weeks and lays about 80-120 eggs per nest, and eggs hatch after 55 to 60 days. The number of nests to date has reached 41 nests in the current year 2020, which may increase in the coming days to reach more than 50 nests according to statistics of previous years, and a rich coral reef reserve provides an important plant for feeding these turtles during their migration season.